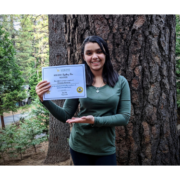 Visions is proud to announce that 8th grader Elissia is the winner of our 2020 Visions Spelling Bee!

The Spelling Bee, which was held on December 15, was the fifth Visions Bee that Elissia competed in since third grade. It was also her last opportunity to participate since the Bee is open only to 2nd – 8th graders in accordance with Scripps, the Bee’s rule officiators.

“It feels incredible to finally win,” said Elissia. “Knowing this was my last year to compete in the Spelling Bee made me study harder and made me more determined to win.”

Due to COVID-19, schools all over the nation were unable to compete in the Bee in person. To adapt to the parameters of distance learners, Scripps created an online version of the Bee wherein students were able to compete from the safety of their homes.

A total of 42 students participated in the Visions Spelling Bee, with five competing in a finalist round. Elissia said she liked that the online version of the Bee decreased her nerves since she didn’t have to stand in front of a crowd.

To prepare for the Bee, she [amazingly!] studied the 450-word list provided by Scripps three times a day everyday since October.

Elissia advises that students wishing to participate in a Spelling Bee should do the same. “I also suggest that you say a word, spell a word, and say a word,” Elissia added. “Those things really helped me every year that I’ve competed in a Bee.”

Elissia will go on to compete in the Central Valley Spelling Bee for a chance to advance to the National Scripps Spelling Bee to be held in Washington DC in June. Scripps is monitoring the pandemic and will decide in Spring if the national Bee will be held in person or adjusted to an online format.

Runner-ups for the Spelling Bee were 7th graders Sadia P. and Chloe F., with 5th grader Reja B. and 8th grader Keely M. also receiving top honors for competing in the finalist round.

Congratulations to Elissa and to all our participants in the 2020 Visions Spelling Bee!