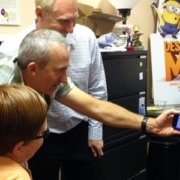 On April 20th, Visions’ student Bobby Truskey toured the CBS radio studios to get a good look at how the radio industry works.

Bobby has long had an interest in radio and currently runs a bi-weekly radio show on the web. Scott Marsh, long time CBS employee, who works a variety of jobs at the station, including radio host and sales manager, walked Bobby throughout the studio, which supports four different stations, including Sports Talk 1140 and KNCI 105.1.

Bobby got to meet and talk about a career in radio with several different local radio hosts and got a great picture of how the field is changing. Scott left Bobby with a swag bag full of Sacramento Kings and other memorabilia on his departure.