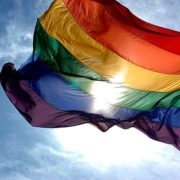 June is recognized as Pride Month across the world, a time to commemorate and recognize the history of activism that has paved the way toward a more equitable society for our LGBTQI+ communities.

Celebrated in countries across the world, Pride Month commemorates the 53rd anniversary of the 1969 Stonewall Riots, a six day protest in New York City. Over the years, Pride Month has evolved to serve as a reminder of the struggle for equality among the LGBTQI+ people in our communities and as a powerful opportunity to join together to proclaim equal rights and treatment for everyone in society. Events such as Pride parades and festivals are hosted in major cities, with one festival in 2005 in São Paulo drawing over two and a half million people to the festivities.

“This month, we honor the resilience of LGBTQI+ people, who are fighting to live authentically and freely,” says President Biden in a White House proclamation commemorating Pride Month. “We reaffirm our belief that LGBTQI+ rights are human rights. And we recommit to delivering protections, safety, and equality to LGBTQI+ families so that everyone can realize the full promise of America.”

Visions In Education is proud to serve and celebrate our diverse group of staff, students and families and recognizes the storied history of the LGBTQI+ community and their fight for equality. For more information about the history of Pride, see the resources below.