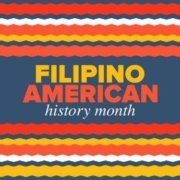 October is the month of celebrations, including Filipino American History Month!

Why Do We Celebrate in October?

On October 18, 1587, the first Filipinos arrived in California. The Filipino American National Historical Society (FANHS) voted to celebrate their history beginning in October of 1993. Fast forward to 2009 when U.S. Congress officially recognized the celebration as a nationwide event.

According to the 2010 Census, California accounts for 43% of the Filipino American population in the country. Until the 1960’s, Stockton was home to the largest group of Filipinos outside of the Philippines. The city still remains a cultural hub and is home to the FANHS museum.

Review the resources below to learn more about Filipino American history: