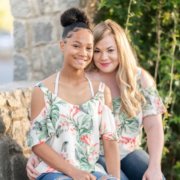 Anee and her mother Lee are two generations of Visions In Education graduates. Lee shared this touching letter with Interim Superintendent Bowman and granted us permission to share it with the greater Visions community as we celebrate the Class of 2021 this week.

My daughter, Anee B., started at CMP Carmichael as a Kindergartener and is going to graduate from high school at Visions In Education. I am also a graduate of Visions In Education, Class of 2003. This is truly a full circle moment for me. You see, when I crossed the stage at the Memorial Auditorium in 2003 as a 17 year old, I was pregnant with Anee. It was the special opportunity that Visions In Education provided me that enabled me to set myself up for success, even though I should’ve been a statistic. I graduated, went on to continue college courses and landed at a CBO where I began the career that led me to where I am today. I write this as the Director of Workforce Development for a local charter school.

Visions and other charter schools continue to be attacked by politicians who care more about political contributions than they do about the individual lives that charter schools touch. Please don’t lose faith or fight as you battle the state policy makers. Visions In Education changes individual lives and provides opportunities to those who would otherwise struggle or fail in traditional and outdated education settings.

My daughter, Anee, had less than great experiences at the local public high school and found her way to Visions. I enrolled her at Visions because I had a great experience at Visions. Anee has worked with her teacher, Ms. Kunst, throughout her time at Visions. Ms. Kunst is nothing short of an angel in our lives. The love, motivation, belief, accountability, and guidance that Ms. Kunst has shown Anee has been critical to her success. Anee credits Ms. Kunst with much of her success. You truly have a gem in Ms. Kunst, and I hope she is compensated for her incredible work. Any student who has Ms. Kunst as their teacher is truly blessed. Anee told me last night, “Mom, Ms. Kunst believes in me when I don’t believe in myself.”

Not only has Ms. Kunst been outstanding, but her counselor Gabe is also amazing! Anee has had a very rough year. Gabe has been an incredible support to Anee. He’s not just supportive but also follows through. I’m sure you already know this but you have an amazing team at Visions.

Thank you for your leadership and service to the community. From CMP to Visions In Education, you’ve made an impact! Thousands of lives have been changed because of the opportunities charter schools provide. You are truly working and living the mission that Gary Hart worked for in California.

Opinions expressed in this letter belong solely to the author, not Visions In Education.