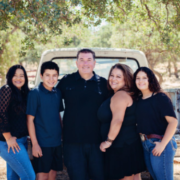 For Hispanic/Latinx Heritage Month we want to spotlight our new Superintendent, Dr. Steve Olmos. His Hispanic heritage played a large part in his journey to becoming an educator.

Steve’s parents immigrated to the United States from Mexico. Although his parents came to the US before they started a family, Steve was raised speaking Spanish and frequently visited his grandparents in Mexico. He vividly remembers when he started school how scared he was, as English was his second language and he was still learning to translate the basics like colors and shapes. Luckily he attended a small elementary school and was able to receive the one-on-one attention he needed to learn English and excel in school.

His transition to high school wasn’t as easy. He went from a small rural school to a large high school and his grades declined. He stayed involved in sports and CTE/ROP automotive classes but struggled when it came to excelling and planning for his future. After graduation he started working in a factory while attending community college. The words of his favorite and most supportive teacher, Mr. Perez, got him to return to college after dropping out to work full-time.

Mr. Perez had been Steve’s Spanish teacher all four years of high school. He had even written the recommendation letter that helped Steve get the factory job. But the letter came with one condition, that he didn’t give up on his education.

“I could have easily continued down this path if it were not for Mr. Perez planting the seed to not settle for what I had,” said Steve. “He is the reason why I became a teacher.”

After attending Butte Community College he transferred to Chico State where he received his Bachelor of Arts in liberal studies with a minor in Spanish and a multiple subject teaching credential. He then earned his Master’s Degree from Pepperdine University and a Doctorate from the University of Southern California.

Steve’s story is inspiring. As a first generation child of Mexican immigrants he had to overcome hurdles. But with a personalized education and a supportive teacher relationship he was able to get a high level of education and now has a fulfilling career serving students that face many of the same challenges.

The connection between his story and Visions In Education’s mission and values is clear. Steve intimately understands the importance of individualized education, personalized learning, one-on-one teacher relationships and dedication to students.

We’re so happy to have him on board and we hope his story inspires you to continue learning and reaching for the stars no matter what struggles you face.