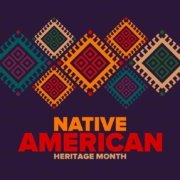 Since 1994 every President has issued proclamations recognizing November as the time to celebrate the heritage and contributions of the first inhabitants of the United States. This celebration is also known as American Indian and Alaska Native Heritage Month.

Dr. Arthur C. Parker, a Seneca Indian, was one of the first people to lead the charge to establish a holiday that celebrates the rich history of Native Americans. The Boy Scouts of America and some states began celebrating American Indian Day back in 1915. Eventually President George H. W. Bush approved a joint resolution to make this a monthly holiday.

Take advantage of this month to learn more about Native American culture in California and beyond.