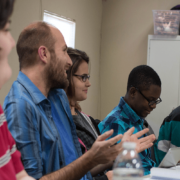 As 17-year-old Jarreau Hudson sat in class he put his head down and had no interest in talking with other students, certainly no interest in reading what he just wrote down as part of a prompt exercise to the rest of his class. This was the old Jarreau, two semesters ago. A year later, the confident young man on the verge of graduating from high school stands in front of a crowd of more than 100 as he transforms himself into the characters in his story, reading it out loud to an expectant crowd.

It’s a familiar story to many students enrolled in the 16-week writing class at Visions In Education. The unconventional class, in conjunction with 916 Ink, the premiere literacy organization in Sacramento, focuses on building courage in students to share their unique voices and improve their writing skills.

“We have visiting writers from the community that come in,” lead English curriculum teacher Hilary Brugger said. “I think there is a blossoming of their writing, but the more profound impact for a lot of our kids is a socio-psychological one. Their confidence really changes and they see themselves differently.”

The class begins like this: About 30 kids sitting around a large table, gazing at each other, some recognizing friends and others not knowing a face in the room. But by class number two, kids start opening up. They talk to each other and begin feeling more comfortable writing down on paper whatever creative words pop up in their head. By class number three and beyond, a deeper change will often emerge. These students begin feeling a little bit better about sharing their stories with the class, because they never get any negative feedback. It’s all positive reaction. That’s a rule.

“No one is allowed to ask any questions about your writing or say anything negative,” 10th grade Visions student Radhika O’Conner said. “They are only allowed to tell you what they really liked about it. So that helps narrow down what you are good at. Once you’re feeling good about it, you can look at it and say, ‘yeah, I don’t like this part,’ because you know the rest of it is good.”

This semester is the fourth time the writing class has been offered at Visions. It’s so well liked that the school is offering it in multiple locations throughout its nine county service area, and for different levels of writers. Its popularity might have something to do with the fact that at the end of the class, the students have their work published in a tangible book, bound with a beautifully designed cover by a graphic artist, and then they hold a book release party. At the event some of the students get up and read their work in front of an audience filled with their peers, parents, teachers and other guests.

“I was nervous when I was sitting down because I was towards the end,” 10th grade Visions student Jennifer Tickner said about waiting her turn to get up and read. “But once I got up there I felt ok reading because it was a lot of positive energy and so that helped. I read a poem. It was about the experience of this class. We each get at least two writings published in the book.”

“This is the third book that we have published,” Brugger said. “916 Ink publishes student writers because they want to celebrate literacy with our students. If we didn’t have the end product for our classes, it would just have a very different feel. Students are really invested in what they write and they care a lot more about where their semi colons go when there is going to be a real and true audience for their books and they will be sold in book stores.”

Every time class is held, there is a representative from 916 Ink amongst the students. In the advanced class this year, inspirator Ryan Cicak, a published writer and poet, joins the kids and makes sure he not only gives feedback, but also shares some of his work too.

“A lot of the stuff that I write tends to be sort of pop culture oriented or weird,” Cicak said. “I wrote a zombie poem that they actually used for teaching when it comes to poetry so I think I kind of have that bridge between their age group and that of the teachers.”

By the end of the four-month class it’s a community of writers that sit in that room together sharing stories and laughing, knowing their work is valued. It’s that same group who come together at the B Street Theatre, in Sacramento, where they hold their book release party and enjoy the company of their friends and family. On February 3 this year, the book “Stumbling through the Stars” is the latest Visions-produced book to make its debut. Students and teachers alike read their works from a podium on a stage filled with bright lights.

“I think teachers going up to read is good because it models the behavior you want your students to have,” credentialed teacher Kristen Wetzel said. “It also leaves you vulnerable and says that you are willing to take the chance and read what you have written as well as the students. It’s important for them to see you taking the risk and being brave too.”

Jarreau Hudson was nervous to share his story at first that Monday night, but he dug deep, ‘took the yes’ mentality of just going for it and shined.

“Probably, if I read this the first day I would have read normally and quickly,” Hudson said. “I am going to leave this class with more confidence and now I can share what I have with others even if they don’t like it. I can take that and make it better and then they will like it as well.”

You can purchase “Stumbling through the Stars” and previous student-produced books on the 916 Ink website. It’s a well-designed place where student writing is featured, contests are held and students and others alike can express their writing online.