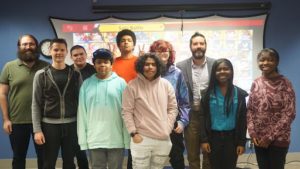 At a tense final-match on December 14, members of Visions inaugural E-Sports Club gathered to take on students from across the country. Started as a pilot program, by Visions staff in partnership with Elite Gaming League (EGL), the Visions e-Sports club combined STEM classes with e-Sport competition as incentive, requiring all students in the class to complete a certain amount of technology electives to qualify for the final competition. 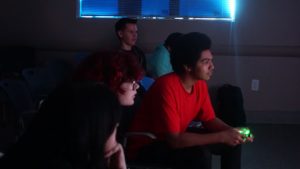 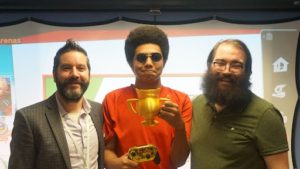 “Many of our students really liked the EGL curriculum,” says Visions Director of Technology and club coach Uriel Gonzalez. “They’ve shown interest in technology as a result of being a part of this club.”

The game of choice this year was Super Smash Brothers Ultimate for the Nintendo Switch.

Under the supervision of Visions coaches, the e-Gaming Club met weekly online and at Visions In Education headquarters to practice and compete in ranked matches. At the championship match, Visions students went head-to-head with other students in our regional bracket finals.

Our team of nine students all performed amazingly, with Visions clinching championship gold thanks to Lenny Muse’s fast fingers in the final match! Visions staff members were in attendance to cheer our team on and celebrate their hard work and success.

Congratulations to our e-Sports team on their championship win! Thank you to all the parents/family who supported our students’ success and a big thank you to Uriel Gonzalez and Matthew Mueller for coaching our students and guiding them through this program!