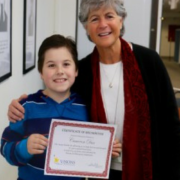 The Visions student who inspired us last holiday season to consider the needs of those around us is hosting another food drive and calling on Visions staff and families to help him reach his ambitious goal.

Last year, Cameron Dax had a goal of collecting 1,500 food items, and through the help of Visions In Education, local companies, and community members, he raised an incredible 6,800 items. Visions went above and beyond by collecting over 4,100 cans and food items, the total of which was split between Cameron’s food drive and the San Juan Unified School District’s food closet.

This year, Cameron, who is now in 7th grade, is aiming even higher with a goal of raising 10,000 cans and non-perishable food items such as pasta, rice, beans, macaroni & cheese, dried soups, pudding, cereal, and any dry good that can be turned into a meal.

“I want to make sure that people in need have food,” Cameron said. “I do [the food drive] because I like to help others and it makes me feel good inside.”

ABOUT THE FOOD DRIVE

Visions is among nearly a dozen local businesses that has heard Cameron’s story and wants to help him give back to the community. Now through Dec. 15, we have a bin to collect food items in both lobbies accompanied with a sign that reminds us of Cameron’s goal.

If you’d rather give money, Cameron also set up a GoFundMe account to collect money he’ll use to purchase food items through a discount partnership he created with Grocery Outlet.

This is the seventh food drive headed up by Cameron, who started his first food drive at a mere 7 years old. His annual venture started as a community service project at his then-school Mission Avenue Open Elementary School. When his original idea of passing out peanut butter and jelly sandwiches to homeless people was decided against by his parents, he decided instead to go around his neighborhood with a wagon to collect cans.

After succeeded in collecting 106 cans during his first holiday food drive, Cameron decided the following year he’d like to make this an annual event. And now the 12-year-old is in talks with his parents about starting a nonprofit so he’s able to aim even higher by reaching out to bigger corporations.

Cameron’s efforts are also apparently contagious as two of his friends are now running their own food drive.

“It makes me feel good that I’m making other people do good things,” said Cameron.

As an incentive to get businesses and the community to give big this holiday season, Cameron will award the highest collecting business or person a painting he created that he tells us is a rendition of a Van Gough. He also painted and sold 3 paintings to be added to his Grocery Outlet fund and has been commissioned to paint two more.

With multiple talents and a big heart, Cameron hopes you will help him reach his goal this year.

Visions will collect food items through Dec. 15.Cameron’s collected goods will be donated to the San Juan Unified food closet and the Carmichael Food Bank. You may drop off cans and non-perishable food items in the bins at either lobbies or give through his GoFundMe at gofundme.com/feedingmyneighbors.