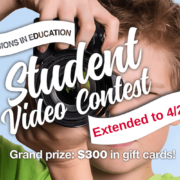 We’ve decided to extend the deadline for the “Why I Love Visions” Video Contest! We’ve received great entries so far but we know everyone gets busy this time of year. If you were hoping to enter the contest but ran out of time or had technical issues we want to give you the chance to enter your video!

We will now accept entries until Sunday, April 29 at midnight.

*Note: if you already entered, but would like to update your video, you are welcome to resubmit it by the extended deadline.

Currently enrolled Visions students in all grades and academies are eligible to participate in our “Why I Love Visions In Education” video contest.

Students can create a 60 to 90-second video explaining why they love Visions to be eligible to win up to $300 in gift cards!

Visions students and families can learn more about the contest and submit their entries on the Wire. Watch videos from last year’s contest on our YouTube channel.