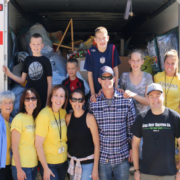 Visions Home School teacher, Christina Dejong, inspired the spirit of giving. The Dejong family previously lived in Santa Rosa, one of the communities recently affected by the wildfires. When she learned of the impact the fires had made she jumped into action working with her firefighter husband to collect donations.

One email and a Facebook post spurred those around her into action. In less than 48 hours, Christina received an overwhelming amount of donations from local fire stations, Creekside Church and Visions. Her husband’s firefighter union graciously donated U-Haul trucks to help move the items.

Thank you to Christina and her family for organizing such a successful and inspiring donation drive.

Visions has also created a donation site with the Red Cross. Your donation will be delivered directly to those impacted by the wildfires in the many counties that need our help.