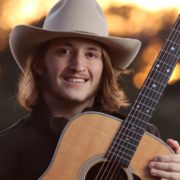 For Zac Schmidt, playing guitar is more than just his career of choice; it’s a way to express himself through music. For more than ten years (since he was twelve years old) Zac has been honing his skill with his instrument as a way to communicate his feelings.

“I’ve never been good with words,” says Zac. “[Guitar] is how I communicate to other people how I feel.”

With aspirations of playing professionally, Zac came to Visions looking for the flexibility to pursue his passion and a schooling environment free of distractions.

“You’re not exposed to bad influences as much,” says Zac. At Visions, Zac connected with Credentialed Teacher Donald Bisio who helped Zac plan his schedule so that he could complete his schoolwork while continuing to improve his musical talents. In his sophomore year, Zac took community college classes to get a jumpstart on college while touring with musical groups across the country.

“If you just put your mind to it, you’re gonna get it done,” says Zac, when asked how he managed to balance his obligations as a high school student and his budding musical career.

Zac worked with his teacher Mr. Bisio to get his assignments completed ahead of his tours across the country and before heading to countries like Germany and Ukraine to play music. In 2017, Zac even set a world record by playing 41 notes in .98 seconds!

It shouldn’t come as a surprise that Zac has continued to travel and play guitar since graduating as part of Visions’ Class of 2020. Compelled by his love of music and his Christian faith, Zac has since been touring the country, performing with acts such as Dennis Agajanian and the Billy Graham Evangelistic Organization while completing his undergraduate work. He is currently on the cusp of receiving his AA in Recording and after performing at Liberty University in Virginia, he has accepted an offer to study there in the very near future.

“There’s no way I would have been able to do all this stuff in a conventional high school,” Zac says, looking back on his time with Visions. Whatever the future holds for Zac, it seems that his love of music will continue to take him far.