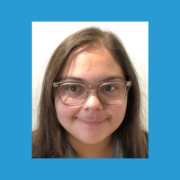 Giselle G. is a perfect example of what happens when a hard working student connects with a teacher who understands how to help them succeed.

As a sophomore, her battle with Graves’ disease (an immune system disorder) and requirements as an ESL (English as a second language) student made traditional schools a hard fit for her. Unable to fit a traditional school schedule, Giselle looked for a program that supported her individual educational needs while allowing her to work at her own pace. At Visions, Giselle met credentialed teacher Miguel Garcia who put her on the path to success.

“My relationship with Mr. Garcia was great,” says Giselle. “His guidance and advice is what motivated me to step out of my comfort zone and explore different academic fields at a young age.”

Giselle worked with her teacher to balance traditional high school courses with improving her English reading and writing skills. Not only that, but Giselle also managed to take college classes with her teacher’s support!

“Giselle is a prime example of the tenacious students we have in our EL program at Visions,” says teacher Miguel Garcia. Giselle’s tenacity and love of learning marked her as one of the more successful students in the English Learner program, one others would often turn to for help.

“Helping other ESL students at Visions came very naturally,” says Giselle. “Their struggles with language learning were very similar to the difficulties I previously had.”

This experience of helping other students proved to be influential as Giselle prepared to leave Visions and enter the workforce.

“When thinking of my career options in college I thought back to helping students at Visions.”

Giselle graduated as part of the Class of 2016 and after getting a headstart on college credit at Visions, she went on to Cal Poly to study teaching English. As part of her undergraduate program, Giselle had the opportunity to study at Yonsei University in Seoul, South Korea where she began studying a third language! After graduating with her BA in 2021, she returned to Cal Poly for her Master’s program focused on Teaching English to Speakers of Other Languages (TESOL).

Giselle’s language-learning skills have served her well in learning Korean while giving her perspective into the experience of how students learn English. She is currently working to complete her Master’s Degree and eventually intends to transfer to a Doctoral program focused on TESOL. Her ultimate goal is to become a teacher who helps other students learn English in the same way her teacher helped her.

“I know for sure that I want to teach,” says Giselle. “I want to give students the same guidance I was given by my teachers. Mr. Garcia’s work played a crucial role in bettering me as a student and now as an adult.”