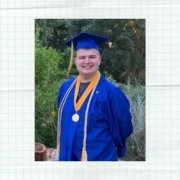 When Jeremiah Crosier was in third grade he read his science textbook in 24 hours. At that moment his parents realized they needed to find a school that could fit his advanced needs. Fast forward nine years and he is proudly graduating from Visions’ online University Prep high school program.

Learning at the Speed of Light

At Visions, Jeremiah’s teachers encouraged him to dig in and learn more about the topics he studied. His flexible high school schedule allowed him to pursue his various interests while also accelerating his learning.

Jeremiah woke up early each morning to attend seminary class, participated in various Shakespeare productions, helped plan and lead a week long camp and served as an intern at SeaQuest Folsom and the Sacramento County Election Office. During his senior year he served as the President of the Visions’ chapter of the California Scholarship Federation. He also joined his local First Robotics team and competed nationally. During his two years with the team they were awarded various honors including the Creativity in Engineering award which came with a $5,000 NASA sponsorship!

“He just didn’t fit the traditional school model,” said Jeremiah’s mom, Brenda. “We liked that Visions was flexible with creative ways to ‘show-what-you-know’ beyond just workbooks and tests but still held him accountable and challenged him to progress and grow at his accelerated pace.”

Jeremiah worked closely with his teachers, principal and counselors to find ways to get ahead. He took AP Calculus and participated in Visions’ community college program by taking Physics at Cosumnes River College. This experience helped him prepare early for his college career. Being able to learn at home also gave him the time to advance in his studies while also enjoying his hobbies like kayaking, mastering complex board games and solving Rubik’s cubes.

Jeremiah will be attending UC Santa Barbara in the fall to pursue a degree in Physics. After a year of school he plans to take a break to serve on a two year mission for his church. In the future he hopes to work at CERN, a European research organization that studies subatomic particles.