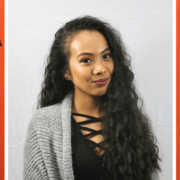 Why did you choose to attend Visions?

I moved from the Bay Area and found that I didn’t like the public high schools here as I hoped I would. I felt that everyone was superficial and they didn’t see the “big picture”. I saw ads for Visions and I also live close by so I applied. I liked that I could attend school and work at the same time.

Visions’ mission, values and morals matched mine so I enrolled.

What was the biggest difference between Visions and the public school you attended before?

I wasn’t growing there and I just felt like I was observing everyone else. [Public] high school felt so systematic and I wouldn’t have been able to work full time if I stayed in public school. I come from a “work for what you have mentality” so I wanted the flexibility to work and learn. At Visions I was able to figure out what worked for me in terms of organization and my personal life. I was able to research what I wanted to study in college during my free time and I can guarantee I wouldn’t have been able to do that in regular high school.

My teacher Suzanne Pope was so sweet and “real”. At Visions I was able to work on my well-being and figure out who I was as a person because of the supportive environment. The flexibility really helped me grow.

You are originally from the Philippines. Can you tell us a bit about your experience coming to the United States and learning English?

I moved to the United States when I was 12. I barely knew English so I did a lot of listening and by the 7th grade I was fluent. The Visions staff was so welcoming and they helped me open up more.

You participated in our Find Your Voice writing class. Tell us about how this class helped you.

The class was so beneficial. It was freeing, relieving and surprisingly therapeutic. It brought out the creative side of me that I never knew existed. I learned more about myself and if I hadn’t taken that class I wouldn’t be as open as I am today. My writing was published by 916 Ink in the book “Verbal Graffiti” (read an excerpt below).

You are now in college and working. How did Visions help you prepare for college and a career?

While at Visions I took an Introduction to Psychology class at American River College and I worked with my counselor, Jonas Heppner, to figure out what I wanted to pursue for a degree.

Visions taught me how to manage my time. I still depend on a planner to organize my days and I make sure to find time for myself. I’m currently attending American River College to pursue a degree in Psychology and I plan to transfer to San Francisco State University or California State University, East Bay to finish my degree.

What are your future goals after you graduate college?

I hope to land a job in either counseling or clinical psychology.

What would you tell someone who isn’t sure if Visions is the right choice for them?

Visions is an inspiring environment. The flexibility helped me with my personal growth and I learned a lot about myself.

Julianne is currently the Assistant General Manager at a local Jamba Juice. She graduated in 2016 and was the recipient of Visions’ Steve Phelps American Dream Scholarship. Her writing was published in the book “Verbal Graffiti” as part of the Find Your Voice writing class. The excerpt below is from her short story, Wanderer:

“As the blazing heat of the sun touched my Californian, caramel skin, I thought to myself: I want to go where the clouds are hand in hand with the colossal, craggy mountain. Where the breeze feels fresh against my sultry skin despite the roasting rays of the sunshine. I am determined to hike that steep and foresty mountain until I am craving for my last possible breath, until I feel the blistering burn in my throat, because I know when I get there, when I feel the slightest amount of pain, I will feel alive again. My name is Jade, and I am not your average teenage girl.”