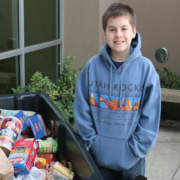 January Update: Cameron exceeded his goal and proudly donated a grand total of 11,498 items which helped fill two of the food banks to capacity!

Cameron Dax is an 8th grade home school student with an amazing passion for giving back. For the past six years he has organized a can drive around the holidays to feed local community members that are in need. He’s proudly collected and donated over 17,400 items since the inception of his drive. He donates to the Carmichael Presbyterian Food Bank, Carmichael Adventist Food Bank and the San Juan Central Food Bank to help feed nine local zip codes.

Get Involved
We want to help Cameron reach this year’s goal of collecting 10,000 food items. Visions has collection boxes at our main office in the front lobby, home school and independent study offices. Cameron’s drive ends on Monday, December 18 so we encourage you to make your donations soon.

Donate Via GoFundMe
This year Cameron and his family were pleasantly surprised to receive a $1,000 donation from GoFundMe. As part of the #GivingTuesday campaign, they chose 100 kids that they felt were making the world a better place and honored them with donations to support their causes.

You too can donate to Cameron’s GoFundMe account here. These monetary donations are used to buy canned goods in bulk through his partnership with Grocery Outlet. This partnership allows Cameron to buy the food at a discount and they even special order some of the items ahead of time to ensure they have enough in stock.

About Cameron
“About six years ago I wanted to make peanut butter and jelly sandwiches and pass them out to the homeless in our community because I felt bad thinking about them being hungry,” said Cameron. “I hate being hungry so this bothered me. We all agreed that the best way for me to help out would be with a food drive. So this is what I did.”

Cameron’s passion for giving back is inspiring and the community recognizes this. In March, he was honored by the Carmichael Chamber of Commerce with the Junior Hero of the Year award. He received a plaque, certificates from members of Congress and was celebrated at a formal event. Good Day Sacramento and the Carmichael Times have also worked with him the past few years to help him promote his initiative. To top it all off, Cameron is a talented oil painter and each year he sells and auctions off his art to further support his cause.

We’re very proud of Cameron’s work and look forward to supporting him each year.