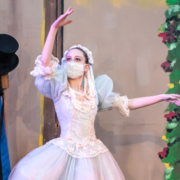 Gianna Zahner has been dancing her way through life for years. An accomplished ballet dancer, Gianna was recently featured in the Benicia production of the Nutcracker during an unprecedented year in dance history.

“There’s a thrill and just overall excitement that comes with dancing for people,” says Gianna. “I love looking out into the audience and seeing the smiles on people’s faces and hoping that I brought a little bit of happiness into their day.”

When Gianna was in second grade, her family decided to look for a home school option that gave her more family time and flexibility with her schedule to pursue her academic and artistic interests. Gianna’s family found Visions In Education, where Gianna connected with highly qualified teachers (including her current high school teacher, Stacey Camacho) who helped balance her schoolwork with her ambitions as a dancer as she progressed.

“I have been blessed with three different teachers during my time with Visions,” Gianna says. “I’ve only had my current teacher for about a year but I’ve enjoyed talking together and getting to know her.”

With her teachers’ support, Gianna was able to customize her learning schedule to account for her dance classes as well as time with her church and her family. She also managed to get a jump start on college and take community college classes at Solano Community College with Visions’ support while still completing high school work!

“I think the important thing to keep in mind when juggling different things is priority,” Gianna says when asked how she managed her schoolwork with her extracurricular activities.

Gianna doesn’t know if she wants to dance professionally yet, but is interested in incorporating her love of dance with her career. She’s considering incorporating dance into her other talents such as photography and writing, perhaps becoming a dance photographer or journalist. Whatever she plans to do, her love of art and dancing will be sure to shine through.

“I like Visions because I’m able to design my schedule around other important things like my dad’s days off, church, and ballet while still getting school done!” Gianna says. “Thanks again for this opportunity!”