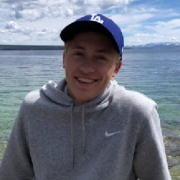 Since Zakry Bassett was twelve years old, he’s known that his future lay out at sea. An avid rock climber and fan of multiple sports, he knew that he wanted to serve his country and his community as a member of the United States Coast Guard.

“I guess I’ve always been interested in it,” says Zak. “I’ve always wanted to be a pilot in the Coast Guard.”

To achieve his goals, Zakry participates in regular Coast Guard drills and training in preparation to enter the service after graduation. A Visions student since second grade, Zakry takes advantage of the flexible at-home schedule to plan his education alongside his training and his love of sports, including soccer, football, and golf.

“I really just make a schedule and I make sure my sports fit into my schedule,” says Zakry.

Part of his success is credited to his teacher, Jessica Wall, who Zakry says is always open to talking about his personal educational needs.

“She’s a great teacher,” says Zakry. “She actually likes talking to you about your needs and what she can do to help.”

Zakry just kicked off his senior year at Visions In Education! After graduation, Zakry plans on getting his EMT license and continuing his training with the hopes of joining the Coast Guard after he graduates. When asked if he has any advice for students just starting high school, Zakry has this to say:

“If you see something you want, just go for it; don’t be scared to try something new. Don’t let fear invade that.”