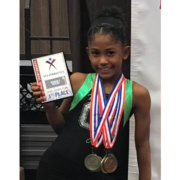 When Tyler Turner was seven years old, her family knew she had been bitten by the gymnastics bug. The more gymnastics YouTube videos she watched, the more her parents realized they needed to get their daughter into a proper gymnastics class. Unfortunately, a very different bug nearly destroyed Tyler’s dream of becoming a gymnast.

“I thought it was a stomach bug,” Tyler’s mother Corrin said. Unfortunately, Tyler had contracted Guillain-Barré Syndrome, a rare disease that attacks a person’s nervous system, leading to paralysis. Instead of learning gymnastics, Tyler had to learn to walk again, going through a long, difficult road to recovery before she could even consider her gymnastic dreams.

Enrolling at Airborne Gymnastics came with new challenges as the rigorous thirty-two hour per week training schedule made traditional schooling impossible. Tyler needed a flexible home school option that would allow her to learn in her own time. A friend referred Tyler’s parents to Visions where they found the support of credentialed teacher Channel Lewis.

With the freedom and flexibility to do schoolwork whenever she wants, Tyler threw herself headfirst into gymnastics training. She’s competed with the Northern California State Gymnastics Team and, this past April, she beat out gymnasts from four other states to become Junior Olympics Level 7 State and Region 1 Champion! She also qualified out of 4,000 other gymnasts for national testing, making it to the top 45 out of 300+ for National A Camp.

Next on the Parade

Now that she’s found her footing, Tyler shows no signs of stopping any time soon. She plans on climbing the Junior Olympic ranks with the goal of becoming a college level gymnast. Her gymnastics team is going to Paris very shortly where she will compete with young athletes from around the world. Only three years after a rare disease threatened her dreams, Tyler is proof that hard work, dedication, and just a little flexibility can make anything possible.

“She’s kind of my hero,” her mother said.