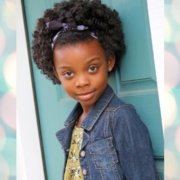 Makenzie Lee-Foster is a 4th grade Visions student with an amazing resume! At only nine years old she’s already become an accomplished actress and author. Visions flexible program lets her continue her education while going on auditions, filming and writing.

Her latest project, Emily’s Wonder Lab, is now on Netflix! Each educational episode features a different experiment led by scientist Emily Calandrelli. This show was one of Makenzie’s favorite jobs, as she got to be herself, meet new friends and get messy learning about science. She’s also starred in the popular TV show, This Is Us, and many other commercials, shows and movies.

As if being an actress at such a young age wasn’t impressive enough, she’s also a published author! Makenzie had been yearning to write a book for years and finally took the plunge. The book is called Kickin’ It With Kenzie – What’s Meant For Me Will Be. She chose to collaborate with Bryce Sweely, a 15 year old artist also pursuing her talents at a young age, on the illustrations. It tells the story of a young girl figuring out what she wants to be when she grows up and the challenges that come along with following your dreams.

Learning On The Go

Makenzie’s mom, Shakondi, chose Visions to accommodate their acting schedule and allow Makenzie to learn at her own pace.

“I would say the thing that made the switch such an easy choice for me was the fact that I can teach my daughter myself,” said Shakondi. “I can use her cues when it comes to subjects or topics that she might be having an issue with and give her the one-on-one attention that I felt she needed.”

Makenzie plans to continue acting but she also aspires to go to MIT or another college to study science and engineering. She’s also interested in fashion design. Knowing how talented and determined she is we don’t doubt that she can do it all!

To see more of Makenzie’s work you can watch her demo reel here. She was also featured in the beginning of Nike’s Kobe Bryant tribute ad as the “dreamer”.