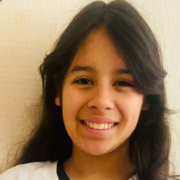 “Even though she may be but little, she is fierce.” Words written by William Shakespeare became a phrase that Visions student Celeste C. lives by. An avid lover of all things celestial, Celeste’s interest has lain overhead since she was a young girl. But unfortunately, a tumultuous and dangerous school environment prompted Celeste’s family to search for another school; one with a safe home-learning environment that allowed Celeste to learn at her own pace.

Connecting with Visions Home School Academy teacher Lisa Kawazoe allowed Celeste’s mother, Carina, to focus on providing her daughter with a quality education in a more suitable environment. Celeste’s grades improved as a result of taking classes that suited her interests, such as Morse code and art classes with her teacher’s encouragement.

Despite her anxiety about chemistry class, Celeste has maintained a solid A+ in the subject! Her teachers, picking up on her love of science, nominated Celeste for the NASA “You’ve Got Perseverance” award recognizing students that have persevered in their academic pursuits and continued to show improvement. Celeste was one of only 20 students selected for this award and the only one from Northern California! Recipients got to participate in a webinar on April 5th with the Perseverance Rover team, asking questions about their mission and what kinds of things go into the successful operation of a rover on another planet. Celeste credits her teacher’s encouragement with getting her to pursue opportunities like this.

“She gives me the courage to try out new things,” says Celeste.

Celeste’s enthusiasm for astronomy has continued to propel her to new heights of academic success. She hopes to one day have the chance to study phenomena like the northern lights or the Crab Nebula up close. Next year, Celeste will be enrolling in a medieval literature class and moving on to biology for science. Her mother credits Celeste’s teacher with pushing boundaries and encouraging her students to pursue their interests.

“I couldn’t be more grateful,” says Carina. “She has really been a guiding light.”

Note: If you would like to nominate a student that’s overcome personal hardship for the You’ve Got Perseverance Award, see this form.