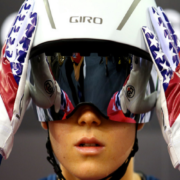 It was a goal she set while still a student at Visions In Education. And now 2011 graduate and team track cycler Ruth Winder is seeing her dream become a reality. In Rio right now, Winder can proudly and officially say she is an Olympic contender.

Like many Olympians, the road to Rio has been long and arduous. Born in England and a nearly 20-year resident of Lafayette, California, Winder began bike riding at 13 and within a year began racing. By 16, she won the Junior National Road Race and began a quest that earned her another junior national gold medal, two national championships in team pursuit, and participation in five World Championships, including the 2016 UCI World Championship in London, where she became part of USA Cycling history by winning the first world title in team pursuit.

In the five years since graduating from Visions, Winder has pursued cycling full time, sacrificing even a job and going to college to have the time, schedule, and dedication to train.

“Racing is fun, but it requires physical and skills training before getting in a bunch with 60 other racers,” said Winder. “At 16, I set myself the goal of going to the Olympic Games. I’ve dedicated myself to that goal [and] wouldn’t be here today if I hadn’t spent many hours over many years putting in the required training.”

Sponsorship by the UnitedHealthcare Pro Cycling Team since 2014 helped make full time cycling possible and opened doors to racing. In October 2014, Winder took a leap of faith by moving to Colorado Springs to be close to the Olympic Training Center.

“There’s a very long selection process to get to Rio,” shared Winder’s mom, Margaret. “[Ruth] had to go to training camps, she had to continually train, she had to prove she was worthy…She moved to Colorado Springs to be close to the right coaches and the right facilities…She had to get the right people to notice her.”

And the right people did indeed notice her. Within a few months, Winder was recognized for possessing the hard work ethic, heart, and rigid standard it takes to be accepted into the Olympic training program and earn residency at the center. The rest is history.

And the future is unfolding just now as Winder celebrates achieving her goal of being an Olympian.

“This is the Olympic Games!” Winder said with excitement before heading to Rio. “How amazing is it that a girl from Lafayette, California is going to compete in the world’s biggest sporting event. I can’t wait to be part of Team USA, to compete, to participate in the closing ceremony, and have a party.”

Speaking on the challenge of pursuing gold as a team, Winder said that while bike racing often seems like it is about one person winning, even that requires a team to make it happen. Indeed Winder’s family is all too familiar with the teamwork it takes to support an Olympic hopeful.

“The last two years have in particular been an incredibly hard struggle, but she achieved her goal and we backed her 100% because she worked so hard,” said Margaret. “We’ve lived with the ups and downs, the stress and pressure, the broken bones and heartache of bike racing, but this is another level beyond anything we’ve experienced. From here on, Ruth will be known as an Olympian. Wow.”

Winder said that home schooling through Visions helped kick start her dream by allowing her to have a schedule that accommodated riding and ultimately the training required to race.

To the high schoolers and young adults out there who have a goal they’d like to pursue, Winder gave enthusiastic advice from someone who, little by little, worked extremely hard to get where she’s at now.

“Go for it! Dream, work, achieve,” she said. “I set myself a goal that I didn’t know I would achieve. But everyday I worked toward my goal and I’m [getting ready to get] on a plane to Rio right now!”

Winder will ride in the Women’s Team Pursuit qualifications on August 11 at 4:19pm PST and from there we look forward to seeing her compete in Round 1 on August 13 at 11:17am and the Finals at 4:53pm.

Visions is in awe of Winder’s dedication and the inspiration she is to anyone who has dreams, goals, and a mountain of challenges ahead of them. Best of wishes to Ruth and Team USA! We watch in excited anticipation.