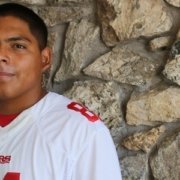 For some students a few missed assignments and a couple of bad test scores could lead to a feeling of discouragement and wanting to give up on school. Soon the assignments pile up and the test scores get lower while the discouraging voices in their heads get louder. Gerardo Soto, a then 11th grader, was stuck in a similar circumstance when he came to Visions In Education from a traditional school setting. “Even though I did well in tests I couldn’t stay focused on my homework,” says Soto, “I looked at my life and I was partying and not concentrating on school. I knew that what I was doing in my life wasn’t going to be enough and I needed a change.”

At Visions, Soto worked with caring teachers, administrators and counselors that helped him navigate through his educational goals. “In my previous schools I had some good teachers but the personal attention I got here was amazing,” says Soto, “[The teachers at Visions] were able to understand me and so help me better.”

Soto’s teacher and administrator were able to identify that he needed stern structure to succeed. They recommended that he look into the Grizzly Youth Academy, a five-month residential program run in partnership with The California National Guard in San Luis Obispo. The structure, routine and tough love administered at Grizzly Youth Academy helped Soto get his education in order.

Soto initially found it hard to spend all his time in a strict routine, sharing his space with 40 other recruits. “[At Grizzly Youth Academy] it was hard at first,” says Soto, “After the first week I actually wanted to quit but I talked myself into staying and I am really glad I did. I knew that when I finished it would all be worth it.”

He overcame his initial apprehension and realized that the structure was exactly what he needed. The initial irritation of sharing his space with others soon turned into a much more enriching experience. “Everyone in your platoon becomes like your family and my Sergeant helped me with good [almost fatherly] life advice.”

As he continued his studies in the Grizzly Youth Academy, his teachers and mentors from Visions continued to support him through his journey. “Every time I would meet someone at Visions I would ask myself, ‘why do they care so much?’” Soto picked Administrator Shannon Alward as his mentor and she stood by him through all his struggles at the Grizzly Youth Academy. Despite the rigid structure of the academy Alward and Soto wrote letters to each other and Alward took frequent trips to the academy in San Luis Obispo. “I can’t believe she drove all the way down,” says Soto, “Some other kids’ mentors didn’t always show up but mine lived the farthest away from the academy and she always showed up. I am so grateful for her.”

Alward says that the long trips that she took from the Sacramento area to San Luis Obispo were tedious but the joy of seeing Soto encouraged from her visit was well worth it. “Everyone says that he is so lucky to have me as his mentor but I feel like I am the lucky one.”

Gerardo has now completed high school at the academy and is looking forward to taking some community colleges and hoping to get into the army. “Gerardo is a great example of the fact that at any time you can change your story,” says Alward , “You just have to take a risk.”

Alward says that when students are willing to take that move towards success the Visions team will step in to help students in every step of their way. “We are a team of people helping each student achieve their version of success,” she says, “We wanted Gerardo to succeed whether it was here at Visions, back in traditional schooling or at The Grizzly Youth Academy. We, at Visions, want to do that for all of our students. If they set their minds to it we will support them in any way we can.”