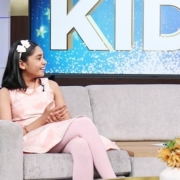 11-year-old Tiara is a multi-lingual soprano singer, member of Mensa (the high IQ society) and a Visions In Education homeschooler! If that’s not impressive enough she has been a college student since she was seven, sung at Carnegie Hall twice and recently released her first album, “Winter Nightingale”.

In April, Tiara appeared on the Steve Harvey show and performed “Ave Maria”. She blew the crowd away with her performance and witty banter with Steve during her interview. She explained that she has taken nine semesters of Spanish, Italian and French and she’s currently learning German. She chatted with Steve about how she enjoys singing in Italian the most and they entertained the audience by comparing accents. Watch her amazing performance here.

Tiara’s enrollment at Visions In Education has allowed her the flexibility to manage her education, attend college, travel, perfect her singing skills and record an album. All of this hard work has earned her recognition and praise across the country. Learn more about Tiara and her accomplishments on her Facebook page.