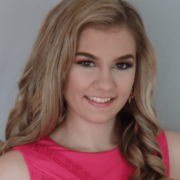 As part of her outstanding teen title she volunteers for the Ronald McDonald House, serves as Vice President of their Teen Council, works their special events and devotes time to their summer camp. In her free time she focuses on her passions for musical theater, acting in local films, learning sign language, honing her Coloratura Soprano singing voice, volunteering at church and taking ballet.

She is also represented by NYLO talent agency and has appeared in commercials and movies, several of which won local film festival awards. Violet shows no evidence of slowing down. She recently sang the National Anthem in front of 12,000 people at a Republic FC game, performed in a musical with the Roseville Theatre Arts Academy and is planning to perform at Disneyland in the fall with her theater troupe. To add to her already impressive resume Violet was featured as one of Style Magazine’s 20 Under 20 Teens in their April Folsom/El Dorado Hills issue.

Violet’s enrollment in Visions’ University Prep Academy has allowed her the flexibility to pursue her passions while taking honors courses and preparing for university. Her future plans include receiving her sign language interpreter certificate, graduating from high school and attending a Los Angeles area university to major in musical theater.