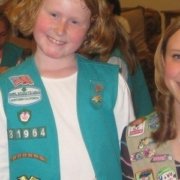 This March 5th onwards the day will be called Kayla Elwy Day in Clayton Calif., a small town in Contra Costa County. Elwy, a senior in Visions in Education, received this honor as a result of winning the Girl Scout Gold Award. This is the highest award in Girl Scouting. This award is given to an elite group who embody community leadership.

Elwy was recognized for creating a community service project that cheered the hearts of senior citizen with her music. She set up 11 singing events at two assisted living facilities in her town and she mentored 80 other Girl Scouts girls into joining her. These girls, ranging in age from 6-12 years old, learned popular show songs to sing for the seniors. The songs include classics like, “My Favorite Things,” “We’re Off to See the Wizard,” and “Anything Goes.” Elwy arranged all the songs herself with the help of her project mentor and voice teacher of 13 years. Following the singing Elwy and her scouts help the seniors make music-related crafts.

“It has been such a joy to see the seniors singing along with us,” says Elwy, “The songs bring back good memories for them and the young scouts love being involved.” Colleen Elwy, Kayla’s mother, says that it was amazing to see how after a few visits the seniors were eager to see Kayla and the girls.

Colleen says that being a part of a school like Visions enabled Kayla to achieve this community service project . “Since she was part of Visions she has the flexibility with her school work and she was able to do more of the things she wanted to do,” says Colleen. She also states that of the five members in Kayla’s group she was the only one who was able to complete the tasks to qualify for the Gold Award due to leniency of her schedule.

With this flexible school schedule Kayla says she is grateful to be a part of community leadership project where she was able to touch the lives of so many. “This experience has been really rewarding and I have established wonderful relationships with many people of all ages,” she says, “And I am really excited to be getting a day named after me. It is a great honor.”