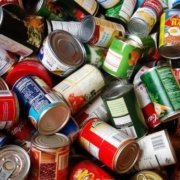 By Bethany Harris and Divya Joseph

Visions student, 11-year-old Cameron Dax, proved this holiday season that no one is too little to inspire a big movement. Dax has been organizing can drives to feed the homeless for the past four years with the help of local families and businesses. This year Dax donated a total of 5,813 cans to the San Juan Food closet. Dax’s spirit inspired everyone at Visions to join in the giving and were able to collect 4,113 cans on their own and donated. Visions donated 1,897 of these cans towards Dax’s drive.

This feat started when Dax saw a family of homeless people huddled together under one blanket on a cold winter’s day. Dax, who is now in 6th grade, says his heart was filled with sadness as he imagined how hard it must be to try to stay warm and have energy while going hungry. So he asked his mom what they could do to help, and they ran to their car to get the groceries they had sitting in there. Upon giving the groceries to the homeless family, the family cried and thanked Dax repeatedly.

Moved by this exchange of giving, Dax sought a way to help the homeless in a bigger manner and came up with the idea of a can drive.

“I want to help those who are hungry because I don’t like being hungry,” says Dax, who also tries to help stray animals and kids who feel left out. “It makes me feel so good to know that the homeless people will at least have food.”

Neighbors, family and local businesses were so touched by Dax’s giving heart and sweet spirit that they all sought a way to be a part of his can drive and helped him raise hundreds of cans of food each year over the last four years. His goal this year was to raise 1,500 cans and food items.

Visions staff bag 6,010 cans that the collected in little over a week.

Dax’s giving spirit inspired the generosity in Visions staff. Office departments excitedly set up a giving competition to see who could donate the most.

“There is something so contagious about giving,” says Dax’s mom, Coral Dax, “When people see Cameron’s giving spirt they often get inspired to make a difference too.”

Over the course of little over a week, Visions raised an incredible 4,113 food items, 1897 of which was donated to Dax’s cause. The remaining cans and food items were donated to San Juan Unified School District’s annual can drive.

Between the nearly 1,900 cans raised by Visions, the donation bin set up at Coral’s chiropractic office, Dax’s Go Fund Me drive, and the 15% discount given by Grocery Outlet to help Cameron maximize his can purchases, Dax’s efforts far exceeded his goal and he was able to donate 5,813 cans and food items to the San Juan Food Closet in time for Christmas.

Anyone who has come in contact with Dax’s story begins by simply wanting to help his cause, but ends with adopting his generous and thoughtful spirit for those in need.

“Our youth are very disconnected from the world around them and very tuned in to their electronic devices,” says Coral Dax. “I am proud that Cameron is not like that. He sees the world around him and wants to make a change.”

Dax loves not just making a difference himself but also inspiring others to make a difference. “If you all do a can food drive too, no one would be hungry and we could all be healthy and strong,” says Dax. “Sometimes the things you give could save lives.”