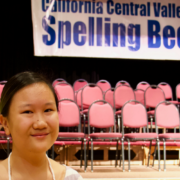 Visions student, Chloe H., competed in last week’s California Central Valley Spelling Bee. She is the home school 8th grader that won our school-wide Spelling Bee in December and she made it through the written test to compete in the oral competition!

Chloe competed against 61 other students from Sacramento, Yolo, Solano, Shasta, Plumas and Placer counties. The spellers were in grades 3 through 8 and only two were eliminated in the first two rounds of the bee.

Chloe did an amazing job and earned 8th place. She correctly spelled, “chronic”, “numeral” and “stalactite”. Her final word stumped everybody! During round four she was asked to spell “Borgesian”, an adjective that means “the characteristic of the Argentinian writer Jorge Luis Borges or his works, especially with reference to fantasy or magic realism.”

We are so proud of Chloe and all her hard work! Check out the photos from the Spelling Bee on our Facebook page.