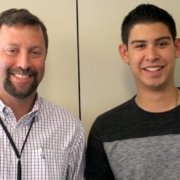 Hector is only a few months away from graduating early from Visions. Not only will he graduate from high school early but he’ll also earn his Associate Degree from Los Medanos College shortly after! How did Hector become so successful? Let’s take a trip down memory lane …

In 9th grade Hector was distracted, failing his classes and drifting off into the wrong crowd. He had goals and talents but the traditional public school model wasn’t working for him. He wanted to work with teachers that cared, in a flexible environment, that allowed him to focus on his interests. After seeing an advertisement for Visions he decided to enroll in the Independent Study program.

Cars, College and a Caring Teacher

So, what did Hector want to focus his time on? Cars! At the age of 10 Hector got his first project – build a dirt bike. If he could build it, he could ride it, and that’s just what he did. After that, his passion for cars only grew. When he enrolled at Visions he discovered that he could take community college classes and receive assistance to pay for tuition and books. He immediately enrolled in the Automotive Technician program at Los Medanos College at the young age of 16.

“The first impression [at Los Medanos College] was ‘are you lost?’ Everybody was just shocked … I was the only little kid there!”

Hector challenged himself. Due to the limited college class availability he took what he could including online, night, and advanced classes. His teacher, Josh Imler, his mom, and the staff at Visions and Los Medanos were there to help and support him along the way. Fast forward to today and Hector is close to graduating high school and receiving a college degree at only 18.

“Hector is a hardworking guy,” said Josh. “I call him a trailblazer; he took initiative to go through the community college program … I learned a lot through his experience.”

What Does the Future Hold?

Hector plans to take even more automotive classes after receiving his first degree. His goal is to own and run a shop and towing company that specializes in brakes, suspensions, diagnostics and custom work. Visions is proud to be a part of Hector’s success story and we wish him the best of luck with his future endeavors.