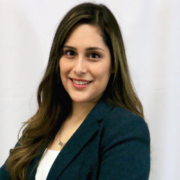 Itati Martin found Visions In Education out of necessity. She was preparing to enter her junior year of high school and learned she was pregnant. Although this was a difficult responsibility to handle at a young age she was dedicated to graduating and raising a family. When she found Visions she knew she was in good hands.

“I enrolled in Visions because of the flexibility. I am so glad I came here, I honestly think it was the best decision for me. I had an amazing teacher, who I hold very dear to my heart. I’m not sure if she will ever realize what it meant to me that she saw more in me than just another pregnant teen.”

Itati’s one-on-one relationship with her teacher, Chris Allen, helped her thrive. Chris set expectations from the start and worked with Itati to schedule her work so she could get ahead to prepare for the arrival of her baby. The ability to work ahead of schedule without distractions isn’t something Itati would have been able to do in the traditional school system.

Despite the challenge of being a teen mother, Itati used her time at Visions to prepare for college. She learned to take initiative and practice self-discipline. After graduating from Visions she enrolled at Cosumnes River College to earn her Associate’s Degree in Psychology and then transferred to Sacramento State to complete her Bachelor’s Degree.

Itati continues to thrive today. A week before she graduated from Sacramento State she was offered an account executive job at an association management firm. She’s happily married and the proud mother of three children. Eight days after her 25th birthday she bought her first home with her husband. Her success is inspiring and she applied many of the skills she learned at Visions to achieve her goals.

“I’m not sure if I would have accomplished half the things I did if I hadn’t met my amazing teacher.”

We asked Itati what she would tell current and prospective Visions students. These are her words of wisdom:

Visions is proud to share Itati’s success story and we hope it inspires current and future students.