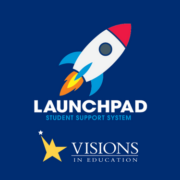 Developed and refined for over a decade, Visions’ Launchpad Student Support System seamlessly integrates all technologies into one easy-to-use platform.

In September 2022, Visions In Education, a Sacramento-based charter school serving over 6,500 students throughout Northern California, applied for and received copyright protection for its Launchpad Student Support System. This unique system, built from the ground up by Visions, ensures that technology is an asset for the school, not a complicated patchwork of programs and systems that can often overwhelm and confuse users.

“As a non-classroom-based charter school, the effective use of technology is critical to our core mission of serving students,” said Tom Tafoya, Visions’ Chief Operating Officer who has been with the school for 18 years. “About 15 years ago, we really started seeing an acceleration of different programs and platforms being launched to assist students, parents, teachers and administrators. It was great to see so much technology being developed for the education space but it quickly became clear that all those different products had the potential to overwhelm users.”

Visions began exploring how it could spend its own time and technology resources to better integrate these different products into a single ecosystem, minimizing the need for end users to organize and maintain the different products.

“The Launchpad Student Support System creates a single point of entry for users regardless of the programs and platforms they are accessing,” continued Tafoya. “This was a significant investment for us considering the technological expertise involved and the responsibility to ensure that the data collected and shared through Launchpad was secure and protected. It’s amazing to look back years later and see how Launchpad has evolved as such an important part of how we serve students now.”

Launchpad was also critical in Visions winning a “Pivotal Practice Award” from the California Department of Education for its ability to quickly and effectively distribute technology to families and staff as the COVID-19 pandemic limited in-person interaction.

“We were incredibly proud of the fact that we were able to quickly adapt to meet the challenges of the pandemic with minimal disruption to our students and staff,” said Dr. Steve Olmos, Visions’ Superintendent. “Because Launchpad was already such an integral part of our work, we were able to avoid the struggles of maintaining student engagement and attendance that impacted so many other schools.”

After spending considerable time and resources building and refining Launchpad, it only made sense to seek copyright protection for this critical asset. As such, all versions of the software code have been copy written and the name of the software has been trademarked. This IP protects Visions significant investment in the system going back to 2011.