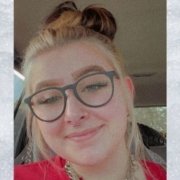 When Grace Fulton isn’t hiking or spending time in nature, she’s conscientiously advocating for women’s rights and the LGBTQ+ community. Unfortunately her unique perspective on the world was not nurtured and supported in a traditional school environment.

“I fell into a bad depression and had horrible anxiety,” Grace says, speaking candidly about the struggles she faced before coming to Visions. After her sophomore year in traditional school, she decided that she needed a drama free learning plan that would provide her a safe environment to graduate in. At Visions, Grace connected with teacher Stephanie Theodule who provided her with much needed guidance and support in her final years of high school.

“She never gave up on me and always helped me whenever I needed it,” Grace says. “I made a very true connection and gained a supporter; I owe a large part of me graduating to my teacher.”

With Mrs. Theodule’s help, Grace developed a personalized learning plan that allowed her to work at her own pace. In an environment that allowed her to focus on her studies more effectively, Grace was able to catch up on credits and get herself back on track to graduate, which she did as part of Visions’ Class of 2021!

Now a high school graduate, Grace hopes to continue her education, focusing on attending a community college before transferring to a four-year college to complete her elementary education degree. She hopes to one day become an elementary school teacher, start a family, and maybe find a ranch with lots of trees to live on. She credits her teacher with helping her succeed and Visions with providing a safe environment to graduate high school.

“If I could do high school all over again, I would definitely choose Visions,” says Grace. “I would have done it from the start.”