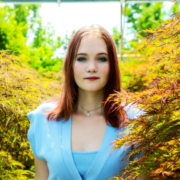 When Ashley Curle was fourteen years old, her family made a journey that took her out of her familiar environment and brought her across the world.

“I moved from Africa and did not know how to deal with the culture shock,” says Ashley. “It was scary enough just moving, but then going into high school would have just been too much.”

As she entered high school, Ashley made a decision; she wanted to focus on her studies and graduate early so that one day she could return to Zimbabwe to visit. At Visions, she connected with a qualified credentialed teacher that put Ashley on the path to her goals.

“Mrs. [Alison] Sampson is an amazing woman,” says Ashley. “We were able to relate on a lot of different things and none of our conversations were boring; I consider her a friend, not just a teacher.”

Ashley’s determination to finish high school early drove her to work hard and focus on graduation, at first competing with her brother to see who could finish high school quicker. In addition to her schoolwork, Ashley managed to find time to pursue her interests, both working a part-time job for an IT company and attending college classes at Sierra College while working on her high school diploma.

“It became a routine to work when I felt like it, without forcing myself. This gave me the chance to grow to like school and actually enjoy my work.”

Ashley graduated as part of Visions’ Class of 2021 and has gone on to continue her education at Sierra College. She hopes to complete her Associate’s Degree and become a Humane Law Enforcement Officer, continuing her lifelong goal of helping animals and her community. She believes her time at Visions gave her the tools she needed to take charge of her own responsibilities and supported her personal and educational goals.

“Visions changed my life and it really set the bar for how schooling should be done, at each person’s own pace and how they work best,” says Ashley. “It showed me that I am capable of anything I set my mind on.”