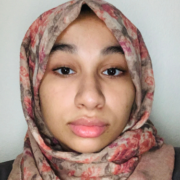 Taiba Rahmani’s interests have always been eclectic and personal to her. As someone who enjoys spending time in nature and volunteering with her local mosque, Taiba seeks balance between her personal life with her professional and academic ambitions.

Naturally, when it was time to start high school, Taiba and her family wanted a school that allowed her to pursue her interests and make time for the things that were important to her. A family friend recommended Visions In Education and Taiba started her freshman year where she connected with credentialed teacher Matthew MacKay.

“I thought it was the perfect fit for me,” Taiba says. “My relationship with my teacher and counselor was great. They were extremely helpful and understanding.”

At Visions, Taiba got the experience of managing her time and taking responsibility for her education. With her teacher’s support, Taiba worked diligently at her own pace while making time for her family and personal interests. As a student, she participated in the Find Your Voice writing program which featured her work in a published book alongside her fellow classmates. She also participated in the Folsom Lake College Patient Care Pathway program which exposed students to the realities and employment opportunities available in the rapidly growing medical profession. On top of all this, Taiba managed to complete high school while working.

“To be an Independent Study student and manage my own schedule allows me to explore my opportunities and interests deeper, and I can make important decisions,” says Taiba.

Taiba recently graduated early as part of the Class of 2022! After graduation, she plans on attending a community college for two years before transferring to a university of her choice. She looks back on her time with Visions fondly and found that the flexibility and opportunity she received were beneficial in the long run to her academic success.

“As a student at Visions I believe it is an awesome opportunity,” says Taiba. “I have attended all four years of high school at Visions and have not felt as if I ‘missed’ out on school as some may think.”