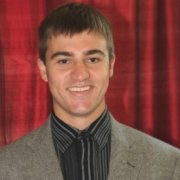 Chris Taylor wanted the freedom to manage his own schedule and the ability to focus on learning subjects that interested him. The typical public school model didn’t fit his interests or aspirations; he was looking for a school that would allow him to accelerate his learning and give him the time to focus on his passions including music, robotics, programming and fencing.

“I couldn’t stand the regular high school setting; the strict class schedules, waking up early for no reason, which many studies show is detrimental to teenagers. There were pointless homework assignments and they taught us ‘on rails’ instead of letting us innovate. There was a complete lack of appreciation for STEM, cliquey drama, and almost no free time.”

Once Chris enrolled with Visions, he felt free. He took community college courses that transferred over to UC Santa Barbara when he graduated, allowing him to get his prerequisites done early. Balancing his regular high school course work with community college classes was easy for Chris, and he credits this with helping him transition to university. He’d already built the skills needed to excel at Visions and didn’t feel overwhelmed.

Where Is He Now?

Chris graduated from UC Santa Barbara at the top of his class. He briefly attended UC San Diego but moved on to George Mason University to pursue his Ph.D. He made the switch so he could work with the Naval Research Laboratory. Currently, he is working with the Navy on robot teams and programming them to understand their relative locations without using GPS.

What exactly does this mean? For example, during the Winter Olympic Games, Intel programmed drones that created shapes in the sky during a light show. The research being conducted by Chris and the Naval lab looks at similar programming to determine how robots can work together without hitting each other or interrupting their workflow. #HighTech

Chris is enjoying his time at George Mason University to figure out what he wants to pursue once he receives his Ph.D. He’s considering teaching or research for a specific industry or academia.

Visions looks forward to seeing what other great things Chris accomplishes in the future!