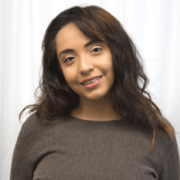 Angel Gonzales needed a change. She was struggling with bullying in her public school and life at home wasn’t easy. Despite all of these challenges she was determined to not let her circumstances affect her future.

When she found Visions she felt like a weight had been lifted from her shoulders. She wasn’t afraid to go to school anymore, she could work at her own pace and she finally felt understood. Angel found herself enjoying her school work thanks to her teacher, Brandon Kim. The work was an escape and Brandon gave her suggestions for additional outlets including karate and UFC fighting. These activities gave Angel a release and instilled the confidence in her to tackle life without fear.

I was really scared of being judged. My teacher would talk to me about what I’ve been through which is something that no one ever did for me. That’s what opened up the gates for me to succeed.

This confidence also helped her pursue her singing career. Since the age of three, Angel has been performing. She sings in the choir, plays many instruments including the guitar and piano and has performed for thousands on YouNow, an online broadcasting site. Angel also sang at our 2016 graduation ceremony at the Memorial Auditorium.

After graduating from Visions, Angel traveled with her fiance and found out that she was expecting a baby boy. She also trained to become a suicide text line counselor to help people that suffered from the same struggles she had faced. To further her career she is pursuing her Bachelor’s Degree in Cyber Security online at Grand Canyon University. She hopes to use her education and strong computer skills to eventually work for the CIA.

Angel is also actively pursuing her singing career. She is performing this summer at the California State Fair and plans to audition for the next season of America’s Got Talent.

“I’m thankful for Visions helping me escape bullying at my old high school and helping me graduate. I will forever appreciate you all!”

We asked Angel what she would tell current and prospective Visions students. These are her words of wisdom:

Visions is proud to share Angel’s success story and we hope it inspires current and future students. Watch her spotlight video below!