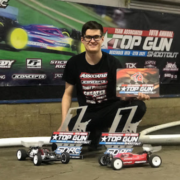 The cars Doug L. drives might be a little smaller than normal, but his skill behind the wheel always gets him to the finish line. A talented RC car racer, Doug’s hobby has garnered him national success and attention from more seasoned RC enthusiasts.

So when it came time to look for a high school, he needed to find a school that would allow him to pursue his passion and pair him with a teacher that understands his goals. And that’s exactly what he found with Visions teacher Sandra Trunzo.

“She’s amazing,” says Doug. “Super easy to talk to and if I need help, I just have to reach out.”

As part of the Independent Study Academy, Doug works with his teacher to learn at his own pace while allowing time to chase his passions. As a competitive 10-scale RC car racer, Doug’s hobby takes him all over the country for competitions. His skill on the track has earned him a number of sponsorships from RC car manufacturers and retailers such as Team Associate, J Concepts, and 1Up Racing.

After four years of hard work, Doug is on track to be part of our graduating Class of 2022! After school, he first plans on going to a community college to “figure himself out” before deciding what he wants to do next. Whatever his path holds for him, Doug intends to continue to chase his love of racing, either as a pro RC car racer or as an R&D engineer working to make the next generation of racers ever faster. Looking back on his high school experience, Doug thanks his teacher for giving him the freedom and flexibility to go after the things he loved.

“I really got the freedom to improve,” Doug says. “In racing and in academic life.”