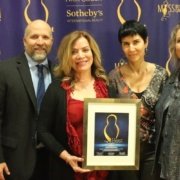 For the past 15 years, the Russian American Media has hosted the BEST awards. Their focus is on sharing the best companies, schools and other resources with the Russian-speaking community at large.

This year, Visions In Education was voted the BEST Home School program in California!

Visions and other winners were honored at an award ceremony and gala on November 2. Some of our English Learner (EL) staff accepted the award, including 9-12 Academy Administrator Saideh Malekafzali, teachers Joanna Lasalle and Gregg Moses, and counselor Nina Handal.

Visions is honored to receive this distinction!

From the Russian American Media:

The BEST by Russian-Speaking Community VIP Award Ceremony is a highlight of the community’s business life. It features the most successful companies, community leaders, volunteers and artists. Every year more than 1 million Russian-speaking consumers in California vote for the best companies and individuals.

Top rated companies get awarded for their excellence and customer satisfaction. The competition is featured in the annual Russian Time Magazine, Russian Observer Newspaper, Russian Community Directory, online at www.RussianPerspective.com, and by other community media outlets.