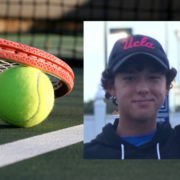 Emon Van Loben Sels was playing tennis before he could lace up a pair of tennis shoes. Since three years old, he’s been honing his athletic abilities and climbing the tournament ranks as his skills on the court improved.

“I really started enjoying tennis when I started competing,” says Emon. “That’s what pushes me every day to work harder.”

With aspirations of one day going pro, he needed a school that supported his ambitions while providing him with the academic skills to succeed in college. As he transitioned into 9th grade and joined the University Prep academy, Emon began balancing his schoolwork with more rigorous tennis training.

“I have a busy schedule,” says Emon. “I couldn’t miss that much time in a traditional school. When I joined Visions, my tennis improved.”

Following the advice of his teacher, Lily Nichols, Emon plans his schedule carefully to complete his work at his own pace, working hard to stay on top of his studies while continuing to push his skills as a tennis player and compete in tournaments. He’s even planning to take community college classes this fall!

“I appreciate his intrinsic motivation to challenge himself to achieve his best,” says Lily Nichols. “Whether on the court or in class.”

Emon’s hard work has not gone unnoticed. This last fall, Emon interviewed at a number of universities interested in enrolling him to play tennis at their school. After being offered admission into Harvard, Cornell, Notre Dame, and UCLA, Emon decided to enroll in UCLA to play tennis upon graduating Visions! He says that while it was a difficult choice, the quality of UCLA’s tennis program and his family’s history with the school were the deciding factors. His goal is to start competing as a professional tennis player in college and advance into the Top 100 tennis players in the country. Looking back, he’s grateful for all the support he’s received so far and hopeful about a future that’s looking bright.

“I’m thankful for my parents, family, and friends, and Visions for helping me out with this process,” says Emon. “I’m looking forward to graduating and going to college.”